Forced Eviction of a Compound in Jaffa

Our company specializes in forced evictions for over 34 years – the experience we gained is simply invaluable.

Jaffa is a barrel of dynamite waiting to explode.

Around a week ago, a lawyer representing a group of investors turned to us in order to evict some criminals who invaded a compound in Jaffa. The tensions inside the city are high as it is due to the fact that Jews and Arabs live side by side, and if you add the fact that the local municipal authority has its own politics – you know that Jaffa is a barrel of dynamite waiting to explode. 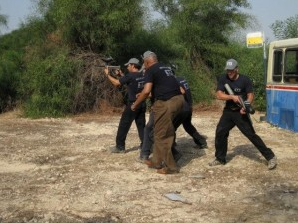 Performing such a job in Jaffa requires many adjustments. We must work carefully and get all the necessary permits. The criminals belonged to a massive Arab crime syndicate counting on earning money no matter what – either they expected some pay in return for them leaving – or they simply wanted to hang on to the asset and manage it as their own.

And then the lawyer turned to us. He showed us evidence that prove that the invasion took place less than 30 days ago (to that date) and so no court order was needed to evacuate the premises. All he needed was an experienced company specializing in forceful eviction of facilities and compounds – and that's exactly what he got.

Upon getting to work, we gathered comprehensive information as to the identity of the people coming inside and outside the building and we have concluded that the best possible time to enter the compound and evict it would be the night. At the same time we contacted a fencing contractor who knows how to build a fence and special gates within only 3 hours.

We gathered at around 04:00 AM with 70 crew members and decided to go in at 04:30 AM. The contractor we hired started building the fence and the compound suddenly resembled a military base. We expected a fight would ensue but the guards at the compound simply fled the scene. We cut the water and the electricity and took over the compound.

Around 08:00 AM some of the intruders arrived and tried to enter the building. We told them that the facility now belongs to its rightful owners. Unfortunately, we were dragged into a fight we obviously prevailed in (despite the help the criminals got from local population) and so they understood they shouldn't return.

We on the other hand prepared ourselves for a long stay at the compound. We downsized the manpower and have established a control room with cameras, focusing on the courtyard area – waiting from instructions from our client on what to do with the asset he owns.