Forced Eviction of an Agricultural Property

Hostile elements took over an agricultural property belonging to an elderly farmer. His representative knew exactly who to turn to in order to return the land to its rightful owner.

A week ago, we were approached by a representative of an elderly farmer whose wife lives in a nursing home. According to the information we received, Bedouin residents infiltrated his property with their herds and flocks and established their own camp spreading around 30 acres. This was a relatively easy operation because the orchard is quite and so it took the farmer time to notice the infiltration.

The invaders set up a camp and allowed their sheep to eat the grass around them. No one disturbed them because the farmer couldn't reach them due to his disability. Luckily, his representative turned to us in order to carry out a harmless eviction. 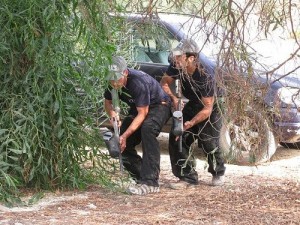 We organized an eviction operation and brought along trucks to transfer the animals. We arrived at night and explained the intruders that their celebration has ended and that they should leave immediately.

Staying at the site after it was evicted

Although we arrived with strong security guards and explained them we are not interested in an armed conflict, we found both hot and cold weapons and arms. We folded the equipment and accompanied the invaders out and sent them back to the South.

It took us no more than three hours to clear the entire area. In the morning a fencing contractor we hired started building a 2 meters high fence. After the fence was established and even now we continue providing around the clock protection ready to confront the invaders if they come back.

We are happy that the old farmer had regained control of his property.