Forceful Eviction of a Farm Situated in the Negev

Anyone who lives or works around the Negev area situated at the southern part of Israel, sometimes gets a feeling that this is the wild-west we are talking about. A combination of heavy-weight criminals and crime syndicates, Bedouins and also infiltrators from other countries created an unimaginable chaos that even the police find it hard to handle.

This is exactly why prominent private security companies (us included obviously) are often summoned to help restore order.

Recently we were asked by our client to use force in order to evict for a farm taken over by criminals. It was a relatively recent invasion at the time (less than 30 days), therefore allowing the property owner to evict it without a court order.

As a security company with extensive experience in cases like this, we knew that we must use force, but one that will not exceed the allowable limits – we knew we should have been tough and determined – and we were.  It should be noted that the farm was taken over by dangerous criminals with a long criminal record, and yet the owner wasn't afraid and decided to use reasonable force in order to evict them. 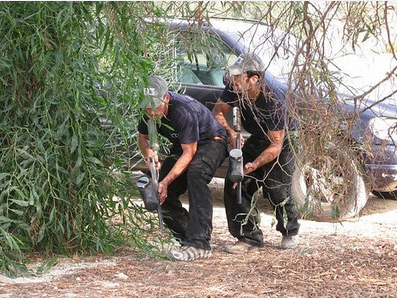 As we operate when it comes to all of our other operations, before we go into action, we gather intelligence and evaluate the situation according to the findings in the field. Following a 24 hours a day observation, we managed to learn and memorize the criminals' entire schedule.

The intelligence gathering helped us significantly when it came to the eventual success of the operation, as we were able to minimize the surprise that may have arisen along the way.[

Based on the intelligence we have gathered, we decided that 4 AM would be the best time to go in and evict the premises. We arrived with no less than 110 robust and strong security guards, we broke the locks and evacuated the people sleeping there and later on we started loading the animals into trucks and subsequently to a quarantine facility near the city of Beer-Sheva.

We have evacuated the entire compound until 7 AM and then we have immediately set up an ongoing 24 hours a day perimeter security preventing the intruders from returning to the farm. As we have expected, the criminals did return after several hours, but they were immediately discouraged by the guards who firmly prevented their entrance. This was the moment that the invaders realized that they will no longer be welcomed at the farm.