A few years ago I got contacted by Amos Shoken, then owner of the Israeli newspapers “Ha’aretz” and “Hadashot” and asked me to devise a plan for distributing his newspaper while his employees were protesting. The newspaper was being printed at a print house in Holon and it was obvious that at the day of its distribution the angry employees would block the exists of the print house and not allow its distribution. If that were to occur it would mean the end of the newspaper and it would no longer be able to compete with the other newspapers in the market. 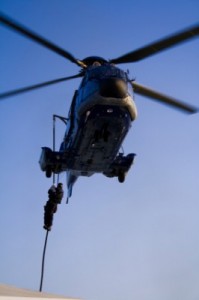 It was obvious that we felt like we might have bitten more than we can chew since the print house had a fence and all exists were blocked heavily, there was no way in sight that we could pull this off.

The only way we could be able to accomplish our mission is using helicopters that would hover over the print house and carry the newspapers to a rendezvous point on the beach in Rishon where  the distributors would load up and the papers to their distribution points. At 5 am on the crucial day , thousands of protestors arrived at the print house gates blocking all the surrounding roads with their cars and bodies, they did it in such a way where no tow truck or tractor could enter to try and remove the obstacles . At 5:45 AM the first helicopter arrived , loaded the first batch of newspapers and flew away, the protestors did not expect this and were looking extremely surprised, ten minutes later the newspapers were on route for distribution. In total there were 4 round trips with the helicopter and the newspaper was successfully distributed. The protestors went wild after realizing that they were defeated, they had never thought of the idea of helicopters being used. The protest eventfully quieted down and the newspaper kept its distribution for many years since with the help of BTS Security.