We have all recently witnessed numerous publications regarding gang wars between various crime syndicates. However, it seems that a new red line has been crossed this past week. The city of Petah-Tikva became the venue of an actual World War between gangs who are willing to kill innocent civilians in order to gain control over certain areas.

We all heard about an explosion taking place outside a packed community center, as well as about yet another blast that killed a 45 year old civilian who simply found himself in the wrong place in the wrong time

The citizens live in constant fear

The main paradox here is that while law-abiding citizens fear for their lives and refrain from going anywhere besides work/school and back home, the criminals are the ones that walk around safely. Those perpetrators that surround must know that wherever they go, they will have to face a disproportionate response that will force them to cease their actions. We at B.T.S Security know how to use reasonable force and if in fact necessary – turn it into a disproportionate one. 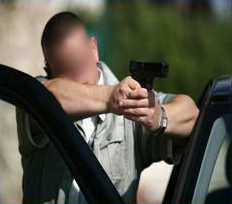 The State of Israel has managed to successfully execute targeted killings against armed and dangerous terrorists and so I ask why shouldn't we do whatever it takes in order to stop the offenders around us? Those criminals ought to realize that killing the innocent people is simply not an option.

How can we deal with criminals?

In order to effectively deal with criminals and perpetrators, we must take an example from the former Mayor of New York Rudy Giuliani who used very harsh methods (unlike those used in Israel) in order stop underworld violence. The police is ought to join forces with the Shin Bet and the prosecution to fight those criminals without any compromise. The police must initiate and remain dynamic in order to prevail in this difficult war to protect law-abiding citizens.

The citizens of Israel must be secured and kept safe. The IDF keeps us safe from external threats and enemies. The police must follow suit and secure the citizens from internal threats using all methods necessary – this is the only way to actually fight crime and win the war.