The Role of Executive Protection and Security Consulting Companies

Every serious company specializing in Executive Protection and Security Consulting must recruit the best people around due to the fact it has a very important task to fulfill without fearing anything.

In recent years, we can see that the role of the security companies in everyday lives has become more serious and significant both for the people who hire them and the managers that run them – in charge of hiring quality personnel.

In the past, private security guards task forces consisted mostly of older security guards that worked in other serious places beforehand and so the private job came only towards the end of their careers. Sometimes it even seemed as if a bunch of adults who joined the force in order to simply pass the time  until retirement,  without having actually considering the seriousness of their role. This is not the right path, security companies must hire only goal-oriented individuals who acknowledge the crucial task ahead.

Joining forces with the police

Nowadays, security companies employ young and strong guys who arrive after combat military service, fully motivated and equipped with an endless hunger to prove themselves. They begin to work with the intention of staying in this business for a long period. This job is a very demanding one and so only the adequate security guards are hired. 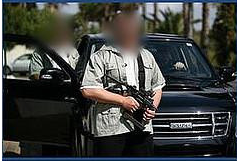 Police now requires that the guards will go through courses and professional training as they are promoted serious roles with great responsibility in terms of securing the safety of the civilians, the safety of the facility they are supposed to secure and so on.

The law has undergone many changes over the years and now provides more options than ever before for security guards that are allowed to detain citizens in the facility they are responsible for if they encounter a suspicious situation or if there are problems of public order, theft and damage to property. In soccer matches, security guards are already replacing the police – and this is only one example of many more.

Today, people tend to treat security guards with more respect than before, by letting them do their job. To be honest, no one wants unnecessary confrontation with tough and determined security guards. Many security companies help the police who rely on them to perform their duties as properly as possible. The police obviously cannot attend all places at once – they need help, and we are more than willing to provide it.