What happens when criminals decide to execute an illegal annexation of urban areas? Sometimes a security company with unconventional methodsis exactly what you need.

It seems that often times some people's boldness simply knows no boundaries. Unfortunately, In recent years hostile takeovers of urban areas by criminals became a familiar and common phenomena. They simply takeover a large area and operate their own crime HQ at the site. This obviously has broad implications on the lives of residents in the city as well as on various municipal factors.

The municipal authority decided that enough is enough

Luckily, the municipality that turned to us for help has decided that enough is enough and that they want to demolish all the buildings built by the criminals that took over the area. We are talking about a rather complicated operation which consists of numerous stages starting with the mayor signing the appropriate orders. 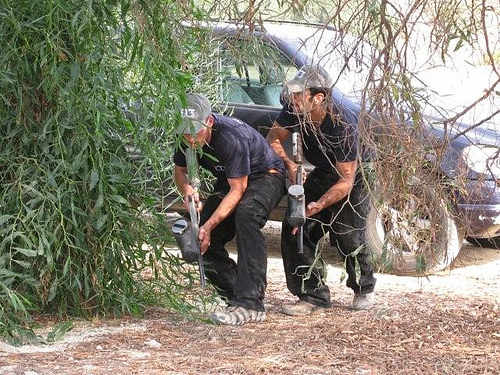 Subsequently we started tearing down the buildings and removing the debris that same week. We left the place squeaky clean and made sure that all animals arrive at a proper shelter safely as soon as possible. The animals obviously bear no fault for this situation and therefore they must be taken care of.

During the second stage, we had decided that all containers ought to be moved to an alternative storage location as soon as possible. The cranes we ordered loaded fifty containers from the park and quickly evacuated the area. After that we cleaned the entire area once more and about a month after the event, the parks and recreation department started re-developing the park, planting grass and trees for the residents to enjoy.

It is important to remember that when a violent evacuation is needed, the right thing to do would be to involve an experienced security company that will assist you in taking back your own lands. We are talking about a very serious struggle that municipalities quite often refuse to get into. Our company, B.T.S Security managed by Founder and CEO Beni Tal, takes care of issues that others simply would not handle.