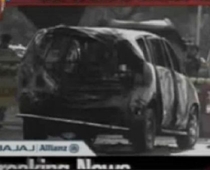 The damaged vehicle in New Delhi (photo by Channel 10)

Securing Israeli missions and establishments abroad has never been an easy job description. The threats emerge on a daily basis, thus, forcing all the formal and non-formal Israeli associated institutions to raise their alert level. However, the security detail itself remains rather small. The cooperation between the Israeli security detail members and local law enforcement makes the job a bit easier; nevertheless, there are a few critical measures that must be emphasized.

Apart from protecting the building in which the Israeli embassy is situated, the security detail must focus on protecting the executives and their family members who are considered highly valuable targets. This past week for example, the Israeli security detail in India has failed to protect the spouse of an Israeli diplomat which resulted in an injury. The problem is that locating and tracking those valuable targets has become a lot easier these days due to a quite renowned system.

Every country provides the cars used by the embassies located on their soil with uniquely   colored license plates often including symbols indicating that they belong to a diplomatic vehicle. The purpose behind this decision is to provide the diplomats automatic immunity from parking tickets as well as with the ability to move quickly and more efficiently in specially designated areas. However, those license plates are also easy to spot and trace, making the people driving them or travelling using them – an easy target for terrorists.

Therefore, the first thing I recommend you to do is to switch the license plates back to the standard plates used by ordinary citizens living in the country. This is exactly what the IDF does with his non-operational vehicles, thus, preventing them of becoming a target.

A habit of breaking habits

Except changing your license plates I recommend changing the car you are driving every two to three days in order to make it harder for the terrorists to locate you as well as collect the required intelligence for their plan. Every plan starts with basic intelligence such as the target's daily schedule and potential weak spots that can be used in their advantage. Once you break your habit and change your daily route or the standard indicators, the chance of carrying out a successful attack against you will decrease significantly.

Breaking the habit is a good thing but it is not the only thing you should rely on. In other words, taking a different route to work or renting a new car does not replace the need for more active security measures such as visible bodyguards, the use of armored vehicles even when out of the office and upgrading the cooperation with the local security forces.

Unfortunately, this last episode in India has showed us that both the Israeli and the local security forces failed to do their job properly and protect the victim. The terrorists managed to reach the most secured street in the area that hosts an array of foreign embassies and carry out their malicious plan.

In conclusion, the constant awareness and a high level of training and professionalism are of utmost importance when it comes to such crucial issues. It is worth noting that the security forces around should be reinforced from time to time by a private and certified security company. To be sure, the task ahead is a tough one; nevertheless, we must face the mission and do our best in order to prevail.