During these last couple of months, the State of Israel has raised its alert level due to the ongoing threats coming directly from Iran. Those threats, alongside Iran's constantly advancing nuclear armament, and the rumors linking Israel to the death of Iran's senior nuclear scientists, make the strengthening of executive protection security – an imperative. 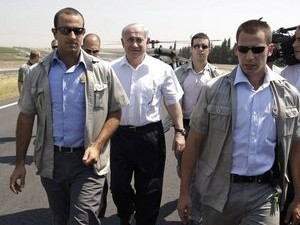 Colonel Beni Tal, managing director of B.T.S Security has been an integral part of the executive protection detail working with many prominent Israeli leaders, both during their stay in Israel and abroad. Among the people he worked with you'll find incumbent President Shimon Peres and late Prime Minister Yitzhak Rabin. Based on Mr. Tal's extensive experience in the field of Executive Protection and Security – here are some tips regarding the security of incumbent Israeli Prime Minister – Benjamin Netanyahu

Massively packed and crowded events, such as the AIPAC Policy Summit in which Mr. Netanyahu has participated recently, make the executive protection task a lot more difficult. The Prime Minister's secret itinerary becomes visible due to the fact that the general itinerary becomes public. In other words, every citizen knows the exact time and place in which Netanyahu will meet President Obama or any other foreign leader.

Furthermore, everyone is aware of the place hosting the Prime Minister at night (The Blair House which is the official guest house for the President of the United States). This allows every potential terrorist to choose the exact time suitable for carrying out his vicious plan of attack.

When faced with such problematic conditions, all security coefficients having to do with Netanyahu's direct protection are ought to be reinforced. For example, if the Prime Minister enjoys a 100 people security detail team on a daily basis, on occasions like this the security detail has to be composed of 500 security guards.

In addition, the amount of the security guards composing the Prime Minister's concealed security circle has to be increased significantly. The abovementioned security detail has to be composed of people possessing a diverse set of physical attributes, as well as different age categories and obviously include both genders. Such criteria are of utmost importance in order for the security team to avoid possible detection. Needless to say that all members of the invisible security circle must be qualified and highly trained as far as the analysis and detection of potential threats are concerned.

The Prime Minister's security detail task can be divided into three separate circles:

The First Circle – consists of a visible security team that constantly follows the Prime Minister. This circle is to be assembled using only the best security guards available. No room for compromise here.

The Second Circle – consists of visible and invisible security guards which scan the premises, looking out for potential threats.

The Third Circle – composed of the police and of additional local and national defense forces, as well as from the Shin Bet invisible executive protection unit.

Moreover, before the Prime Minister arrives at a scheduled event, a security team must scan the entire area between 10-20 hours in advance. Given the fact that the exact dates of such events are published around 6 months before the actual day of the event, we cannot rule out a theoretical possibility according to which people in charge of the daily maintenance of a facility can plant bombs which will be remotely activated later using a mobile device.

In addition, the facility must be thoroughly searched by dogs trained in detecting explosives, potential sniper hideouts must be found and finally, the use of devices designated to disrupt the ability to detonate a remote bomb using distant mobile signals is in fact worthy of consideration.

In conclusion, times like this obviously make life a lot harder for the security detail in charge of securing the Prime Minister and other senior cabinet members. However, highly trained and qualified security guards are supposed to take every possible variable into account. The safety of the Prime Minister can be guaranteed by an efficient cooperation with both local and federal security forces, constant awareness and the ability to neutralize potential threats.